Yellowtop (Flaveria linearis) is a fabulous (usually) fall wildflower. It is a member of the daisy family, Asteraceae, though, at glance, you may not see the family resemblance. The round center of a what we think of as a conventional daisy, the ‘disc’, really contains many tiny flowers, and the petals of the daisy are know as ray flowers.

The many flowers of yellowtop are arranged in corymb, a flat-topped inflorescence in which the outer flower open first. Each flower ‘head’ is composed of 2 – 8 disc flowers, which sometimes (& often not) have a single ray flower, shown in the center of the photo above. Each corymb can contain up to 150 tiny flower heads.

Each individual flower contains lots of nectar and attracts a plethora of pollinators. Bob Montanaro, Pelican Island Audubon Society Office Manager, photographed this handsome honeybee collecting nectar and pollen at the (Pelican Island) Audubon House. Note the absolute accumulation of pollen in the corbicula (pollen basket) on her hind leg.

An ant and a wasp also posed for him on the yellowtop.

The yellowtop to the south of the Oslo Riverfront Conservation Area office at the (Pelican Island) Audubon House was planted on May 23, 2015, from 3″ pots and had grown substantially by June 18 …

This plant sometimes is called narrowleaf yellowtop for its linear, opposite leaves. Note how its (sessile) leaves attach directly to its reddish stems.

Now it is abuzz with a bevy of bees, butterflies, skippers, wasps, flies, and other insects seeking nectar and pollen … 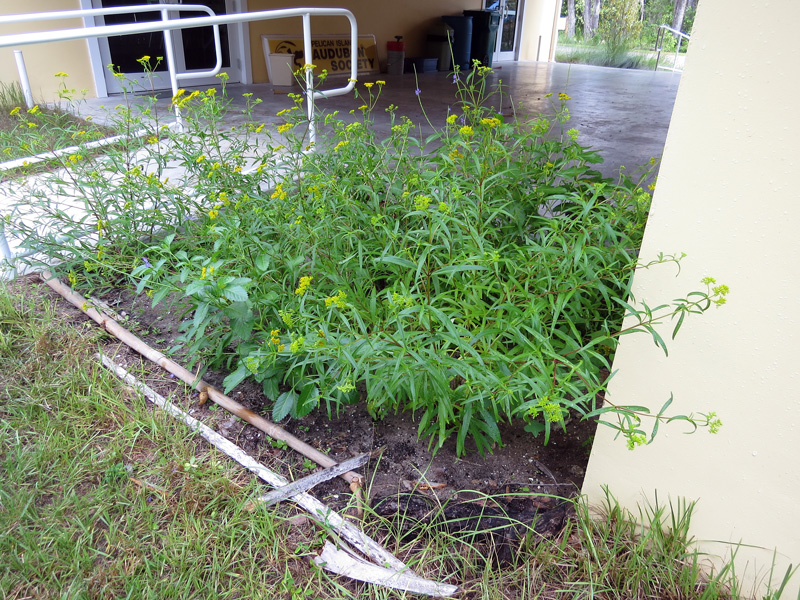 Yellowtop is a very versatile plant and can be found growing in sandy soil on the back of our beach dunes as well as in marshy areas. This plant is well-suited to coastal areas of Florida and is nearly endemic; It grows in Cuba and a few Caribbean islands. Tolerant of saline and alkaline soils, it grows in mounds to about 3′ tall and can be a marvelous addition to your landscape.

Yellowtop re-seeds freely. After flowering, cut back the spent inflorescence and other dead parts.