Donna Winter (Class of 2016) pointed out fourpetal St. Johns-wort (Hypericum tetrapetalum) at the Wabasso scrub on our walk there on 11/11/2018 led by Jane Schnee.  Sometimes it is called St. Peter’s wort, mistekenly.  We also have seen this plant in the scrubby pine flatwoods and xeric scrub at the Oslo Riverfront Conservation Area on both sides of Oslo Road, at the North Sebastian Conservation Area, and at the Toni Waterfront Preserve.

This plant, like coastal plain goldenaster (Chrysopsis scabrella) seen above in its “young” rosette stage of life, is nearly endemic.  It grows throughout peninsular Florida, in Georgia, and in Cuba.

Its dull-green, opposite leaves are stalkless (sessile) and clasp the stems.  They are ovate, egg-shaped, and wider toward the base.  The leaves sometimes have a bluish-green cast. 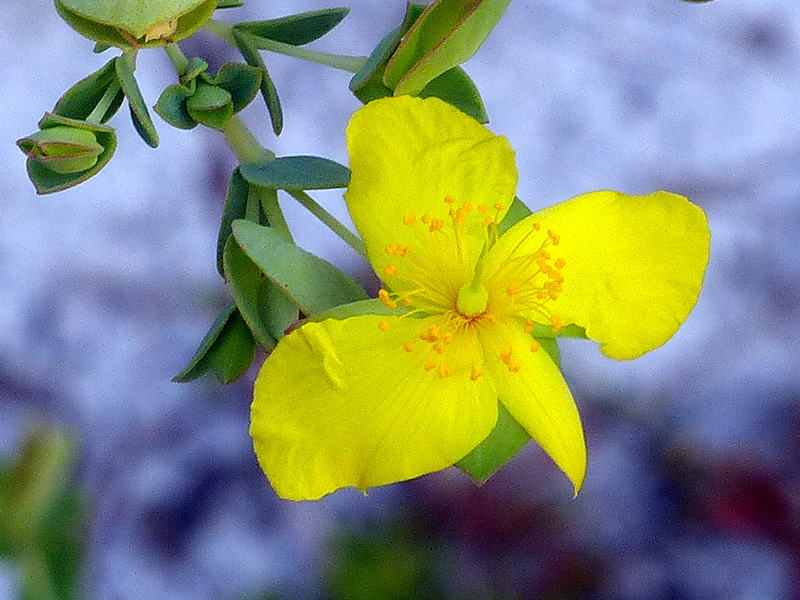 Its  stems often are reddish in color and can become a bit woody.

Its reddish woody stems, paired clasping leaves, and X-shaped, four-petaled flowers can help you to distinguish this species of hypericum from the 33 other species found in Florida.