Queensland umbrella tree (Schefflera actinophylla), once upon a time, seemed to be planted in every new local Florida landscape for the exotic, tropical appearance of its large, shiny palmately compound leaves. Most frequently, this easy-to-grow tree that reaches more 25’+ tall was planted beneath the eaves right next to the house foundation. Also known as octopus tree and just plain schefflera, it came to be notorious for its roots which have been known to crack the concrete foundations of homes and pools.

Schefflera no longer is a favored by the landscape and nursery industries and has been characterized as a Category #1 invasive pest plant by the Florida Exotic Pest Plant Council. The UF/IFAS assessment of non-native plants in natural areas finds this plant to be invasive in south and central Florida and recommends against its use in the landscape. In north Florida, schefflera succumbs to freezing temperatures.

Like many exotic plants that have turned out to be invasive pests, schefflera tolerates a wide variety of conditions, though not cold. It has invaded a variety of habitats from Brevard County southward including sand pine scrub, pine flatwoods, hammock, cypress strands, and disturbed areas. Birds spread its seeds widely, including native birds like mockingbirds and fish crow, as well as exotic birds like starlings and parrots.

The top photo and the photo below were taken at the North Sebastian Conservation Area,, a 407-acre conservation located in northern Indian River County Likely, the small plant below is the bird-borne progeny of the nearby large individual. 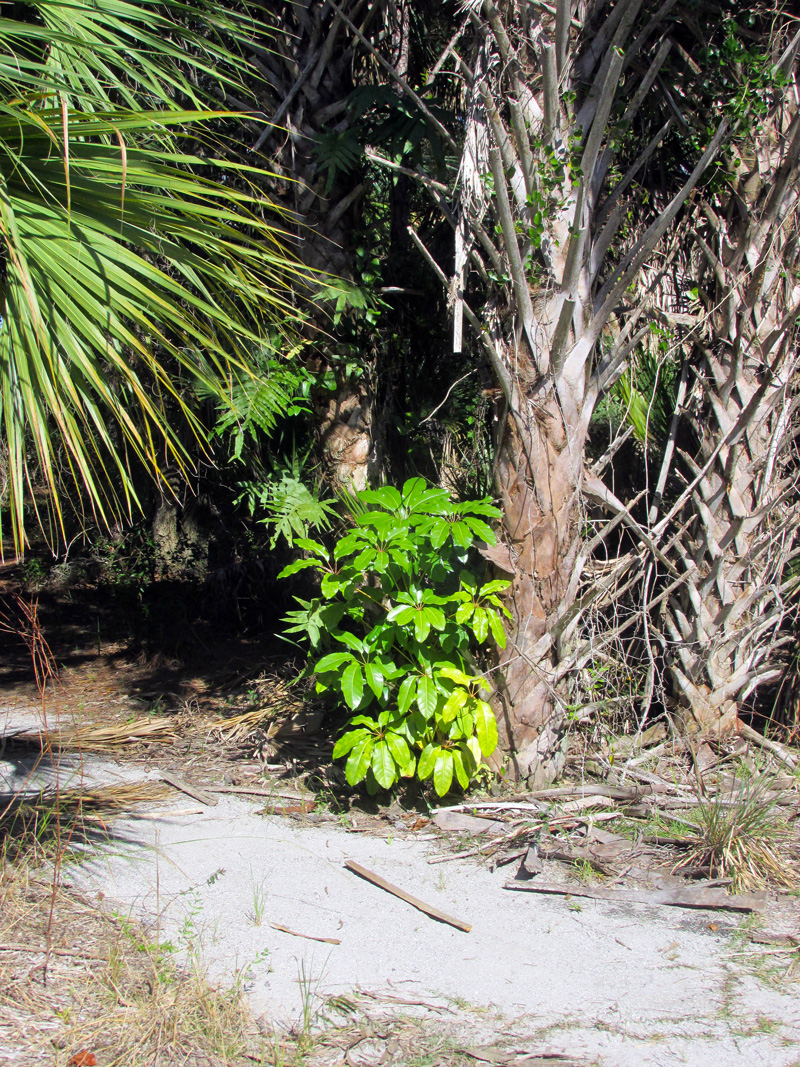 Schefflera does not flower and fruit until it is 10 to 15 years old and substantially sized. Its 3′ stiff terminal clusters of reddish flowers are quite striking and tropical in appearance. 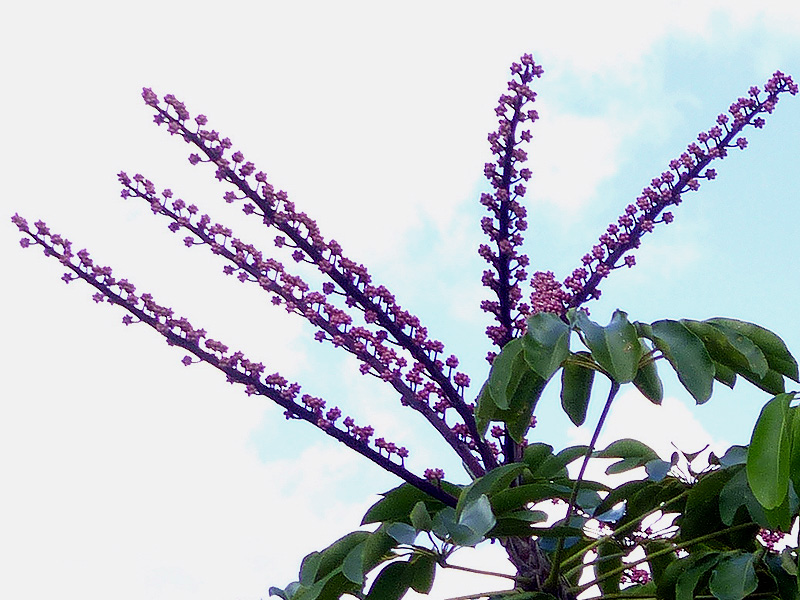 Schefflera is difficult to kill. The photo above comes from a plant that someone tried, unsuccessfully, to whack down …

… only to have it grow back with a floral vengeance … 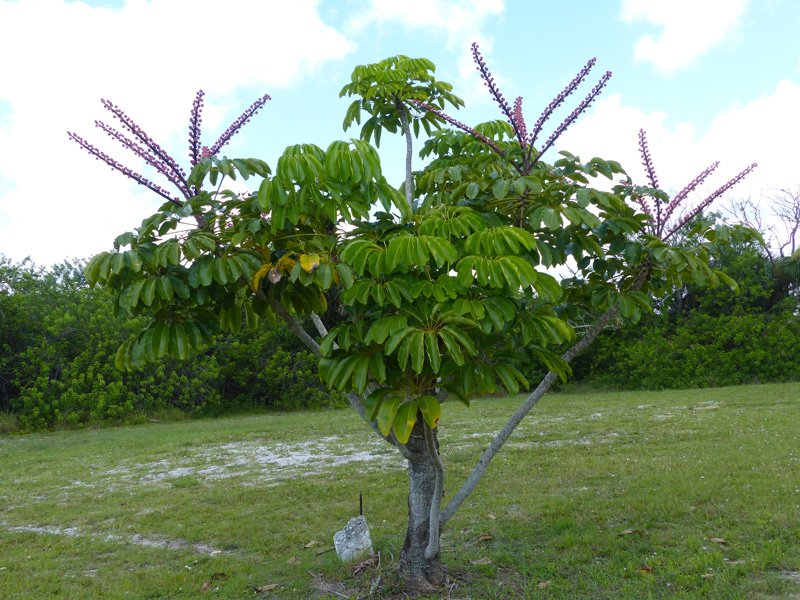 As with many tropical plants, flowering sometimes occurs twice per year in the spring and early fall. The plant shown above is currently flowering.

Full sun or deep hammock shade are suitable to schefflera. The lanky schefflera shown below in 2012 at the Indian River Lagoon Greenway in 2012 is reaching for the sun from the shade of a live oak (Quercus virginiana) canopy.

Schefflera is difficult to kill even with herbicide. It is best pulled when it is a small seedling.

Seedlings often look different then their adult counterparts just as with people. Check out this schefflera seedling that has volunteered next to a live oak in a shady spot in a CVS parking lot …

You will find volunteer seedlings in the hammock areas at the Oslo Riverfront Conservation Area. The one below that was growing in a small sunny spot in the midst of wax myrtle (Myrica cerifera), braken fern (Pteridium aquilinum) and saw palmetto (Serenoa repens). Note that it is lighter in color due to sunnier conditions. 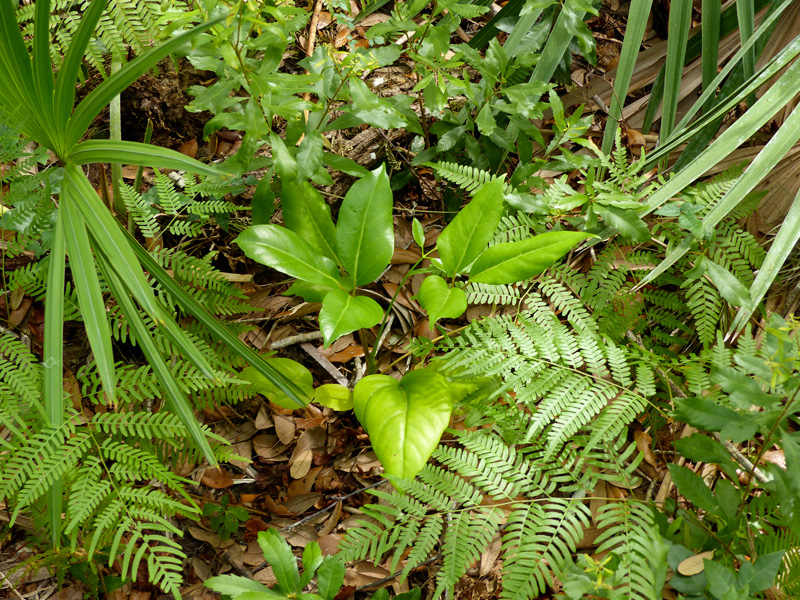 Allan McCarthy from the Institute for Regional Conservation (IRC) happily dispatched this schefflera seedling on May 21, 2017 “fun” walk not in if “official capacity”. IRC was the contractor hired by Indian River County with upland invasive plant control funds from the Florida Fish and Wildlife Conservation Commission to work at ORCA and Captain Forster Preserve last year. 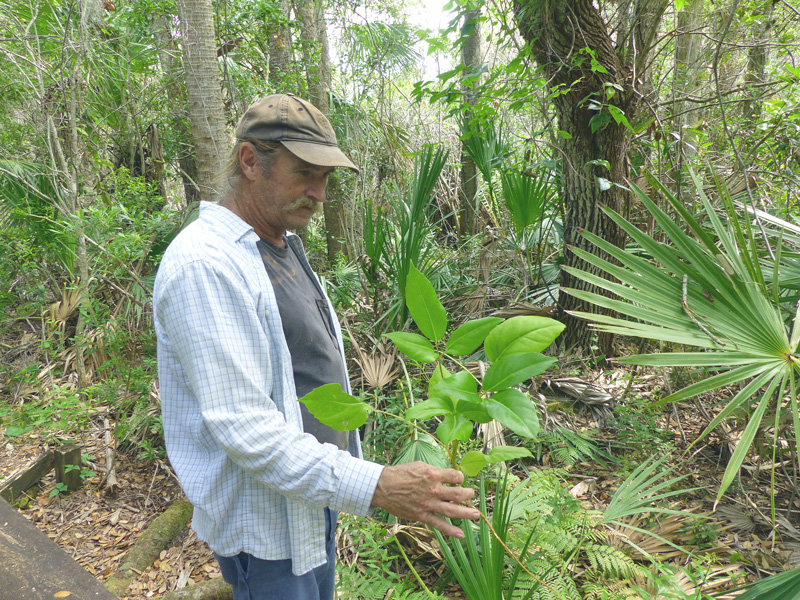