They are not ripe yet, but they soon will be. Strawberry guava (Psidium cattlelianum) fruits supposedly taste somewhat like strawberries.

Cherry guava is yet another common name. Its fruits, when ripe, are purple-red like cherries. Red ripe fruits are likely to contain some extra protein, including guava fruit fly larvae (Anastrepha striata) and Caribbean fruit fly larvae (Anastrepha suspensa). The Caribbean fruit fly is a significant pest of commercial citrus that can prevent the sale of citrus fruit to foreign markets. Indian River County prohibits the planting of strawberry guava due to its economic impact.

Because of its delectable fruits, strawberry guava has been in the horticultural trade since at least 1887. This many-seeded plant is spread by wildlife and quickly escaped from cultivation. Florida Medical Entomology Laboratory researchers Dr. Bill Bidlingmeyer and James Haeger spoke about thickets of strawberry and common guava (Psidium guajava) that were killed by the freeze of 1962 — only to be replaced by thickets of Brazilian pepper (Schinus terebinthifolia).

Both strawberry guava and common guava have been present at the Oslo Riverfront Conservation Area. Volunteers have removed or treated with herbicide most, if not all, of the guavas present.

Strawberry guava has opposite leaves that are slick (glabrous), entire, elliptic to oblong, and held on a short petiole (leafstem).

Like a native member of the myrtle family, simpson’s stopper (Myrcianthes fragrans), strawberry guava has distinctive red, defoliating bark, the beginnings of which are shown above. Please plant a simpson’s stopper for a bark experience that rivals crepe myrtle and is evergreen.

Avoid planting strawberry guava, even if you esteem its fruits, since it is a significant host of a pest of citrus, a major industry in Indian River County, and because it invades disturbed and natural areas. It is a category #1 invasive pest plant, according to the Florida Exotic Pest Plant Council. It is seen below in a tableau of invasive pest plants — old world climbing fern (Lygodium microphyllum) and air potato (Dioscorea bulbifera). 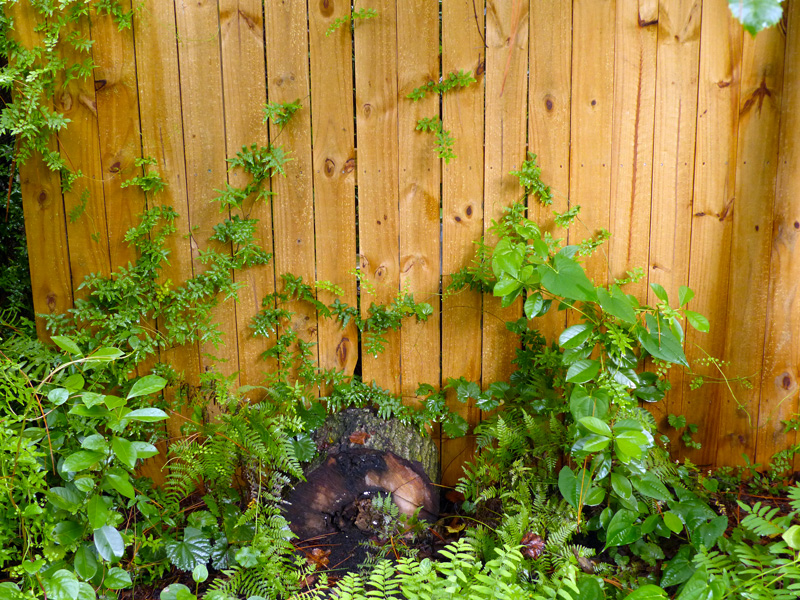