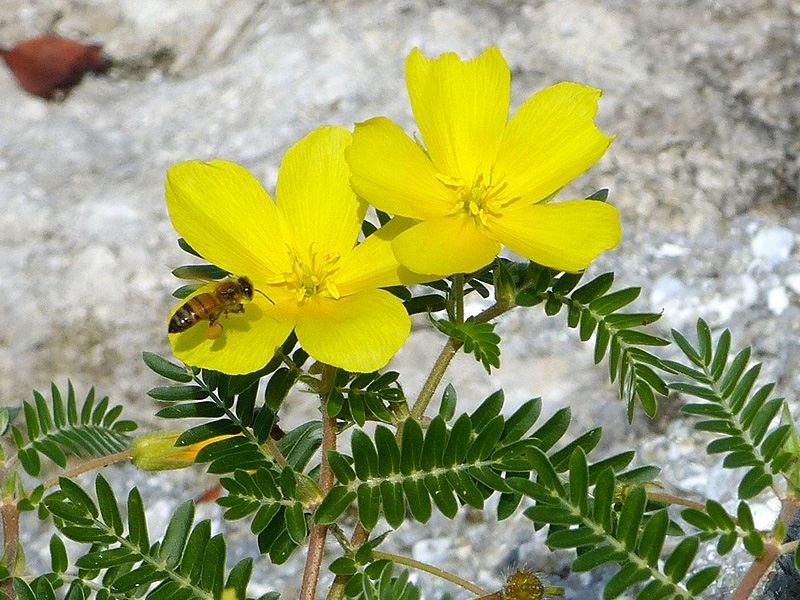 At a glance burrnut or Jamaican feverplant (Tribulus cistoides) sure is pretty, but close encounters — by barefeet or by bicycle tires — with the fruits of this plant often do not end well.  Puncturevine, goat’s head, caltrop are other common names for this plant, as is buttercups (a demonstration of the lack of specificity of common plant names).

Its bright yellow, five petaled flowers are about 2″ across, abundant, and eye-catching even at fast speeds. Its flowers are held on long pedicels (2-3″ flower stalks). We saw this plant along Highway A1A at the Captain Forster Hammock Preserve and at the Brevard Barrier Island Sanctuary and Education Center.  Native to east Africa, It thrives in dry, disturbed sandy soil in warm climates including Texas, Louisiana, Georgia, and Florida.

This drought tolerant and salt tolerant plant begins to flower at 3 weeks old and can produce fruit at 5 weeks of age.  Its fruits are a capsule, sometimes referred to as a spiny nutlet, capable of puncturing bicycle tires and feet.  The capsule has five woody segments, each of which is festooned with 2 tough lateral spines and 2 shorter spines near the base directed downward. Each segment holds 1 – 5 tiny yellowish, flat ovate (egg-shaped) seeds with a pointed tip.

Some seeds will ripen within 6 months with many seeds remaining viable in the soil for many years. A plant can produce up to 1,000 burrs per year, so the math is scary. Not surprisingly, burrnut is classified as a category 2 invasive pest plant by the Florida Exotic Pest Plant Council (FLEPPC). 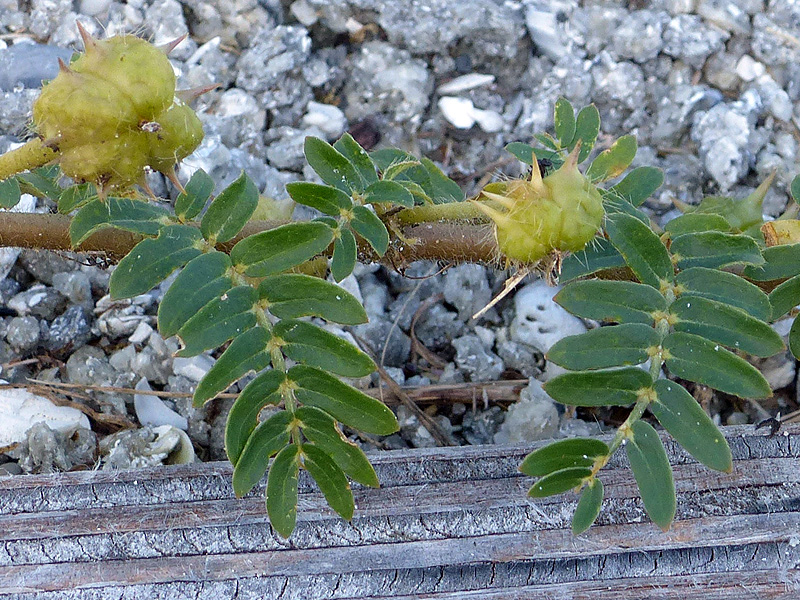 The genus name Tribulus comes from the Latin word, tribo, to tear. It also is the Latin name for caltrop, a spiked metal ball used in medieval warfare (and gladiator movies) to hobble horses. 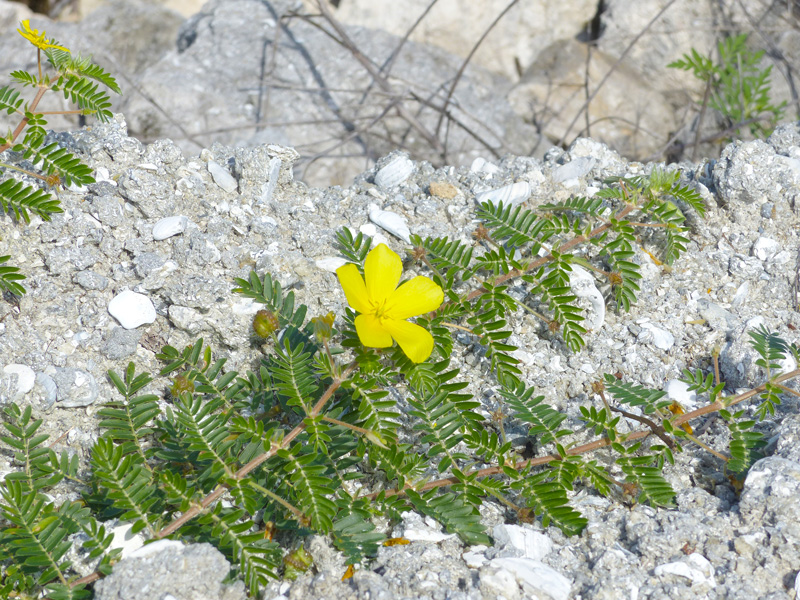 Its growth habit is prostrate, so it often escapes the wrath of the lawn mower to form large, dense mats that can be up to 12′ wide.

Its stems are red-brown and many branched.  New stems are adorned with short, soft, hairs when young but often become hairless when mature.  Its leaves are opposite and even-pinnate, and the leaflets often are of different sizes. 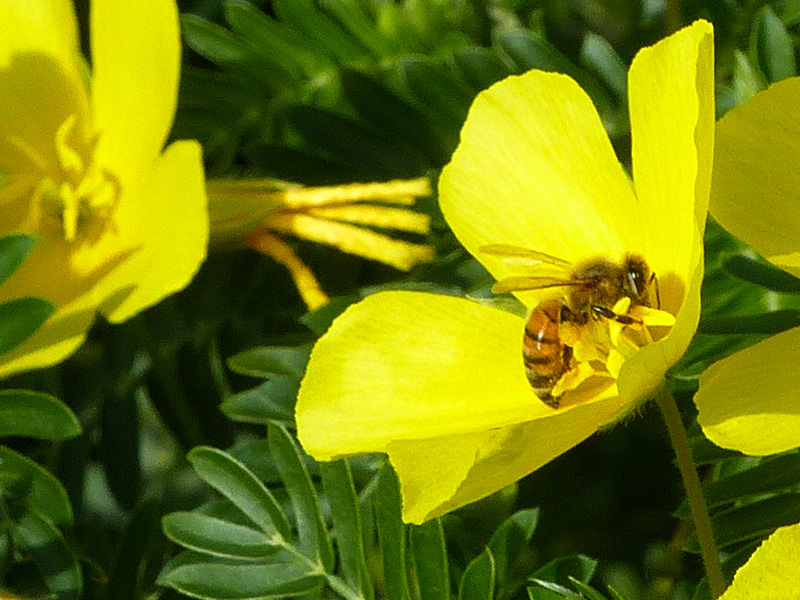 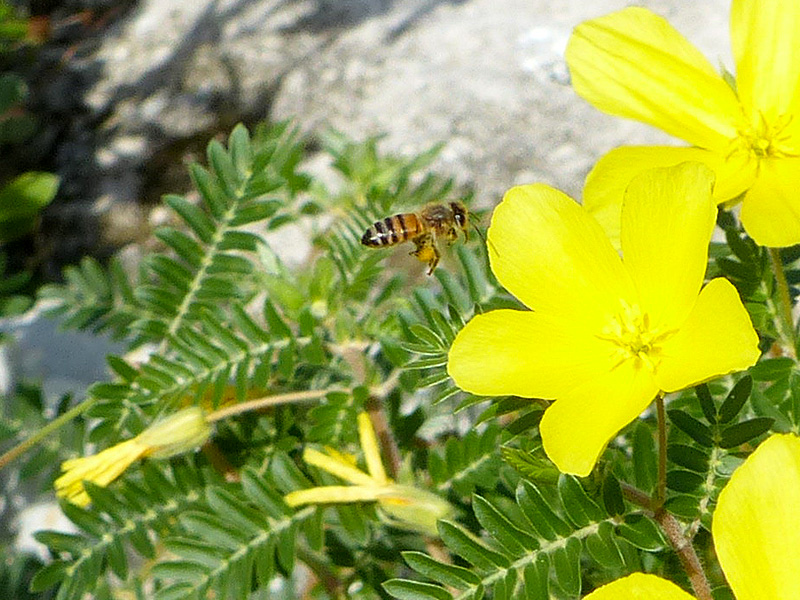 A bumbling beetle, the most ancient and ubiquitous of our pollinators, may have been involved with this damaged flower …

Note the immature nutlet beginning to form in the lower right corner of the photo above.

Burrnut is a perennial plant with a deep taproot. The other Tribulus found in Florida is the annual Tribulus terrestris, which has been awarded the common puncturevine by the Florida Plant Atlas. It has much smaller flowers on shorter pedicels. (<1/2″). According to the Florida Plant Atlas, puncturevine is not native, but other sources say otherwise.

Both of these plants are pretty, attract European honeybees, spread readily, have nasty burrs, and always are weeds to me.