Pictured above on 7-15-2018 are 14 of the 16 people (and 1 of 2 dogs) who turned out to traverse the Central Railroad Corridor Greenway Bridge (CRCGB), a recently opened pedestrian overpass that crosses I-95.  Diane Morgan and John Warner did not make the crossing since their dog Gwen found the crossing too scary.

We began at the Fellsmere Preserve Trailhead and walked on the 12′ wide pedestrian/bike path that follows the route of a railroad that once traveled from Fellsmere to Sebastian.  A narrow gauge railway was established in 1896, and Fellsmere Farms Company operated a larger gauge railroad on this path from September of 1910 to April of 1911 to carry logs to the Florida East Coast Railroad in Sebastian and to transport materials and equipment for excavating drainage canals around Fellsmere.  Passenger service began on this route on May 1, 2911 and continued until November 30, 1952.  Now, a 2-mile pedestrian/bike path spans from the North County Regional Park to the Fellsmere Preserve, and, eventually, is planned to be 15 miles in length.

You can see the CRCGB in the background of this picture taken looking to the west.  The picture was taken from a distance away since no one looks their best after walking for an hour in the Florida heat.

Shoestring fern (Vittaria lineata), an epiphyte, growing on the trunk of a cabbage palm (Sabal palmetto)

Northern needleleaf (Tillandsia balbisiana), another epiphyte, which was growing on the a red maple tree (Acer rubrum) 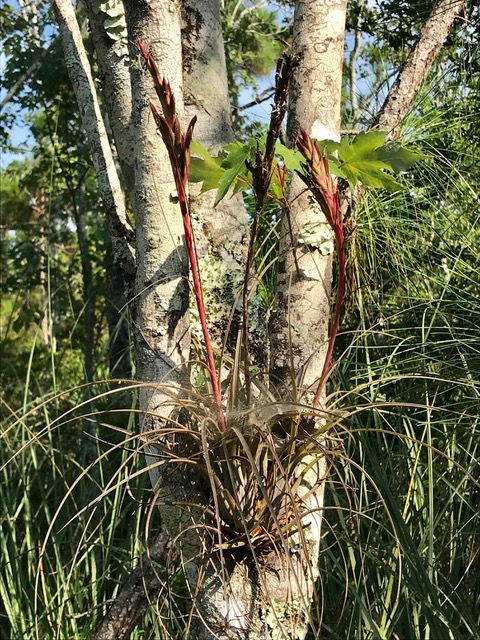 Button rattlesnake master (Eryngium yuccifolium, a plant that was spotted near to the end of the walk and not seen by all

The first two plants, the epiphytes, we know from their presence at the Oslo Riverfront Conservation Area (ORCA).  Pickerelweed grows in the ditch along Oslo Road.  The last two plants are not known from ORCA.

A good time was had by all, especially Delta Dawn (dog) …